Retired and Past Players 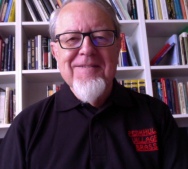 Edward is an immigrant to Penkhull, having been brought up in Solihull.  Before retirement he lived, studied and taught in Oxford, Dublin, York, New Brunswick (New Jersey), London and Cambridge.  His other passions include the history of science fiction and utopian fiction.

When in York he played in Nachtanz, a medieval wind-band, but had never been in a brass band before, moving here and joining the training band in 2017.  As a professor of medieval history, we thought Edward was joking when he said he played a sackbut (an early Renaissance trombone) but that was exactly what he turned up with for his first rehearsal with us! He has settled in extremely well playing something a little more modern. 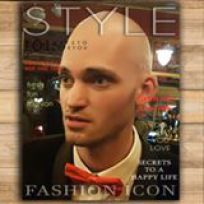 Marc joined us in May 2017 after moving to the area with work. Originally from Meerbusch near Dusseldorf he has a wealth of musical experience, having perfomed in the Flora Sinfonie Orchester, marching bands, dance and cover bands, brass quintet and even better - Egerlander Oompah Band!

Clearly someone who relishes dressing up to suit the occasion, we just know Marc will settle in well and enjoy performing our varied and entertaining repertoire. Here he is sporting his recent new hairstyle!

Update September 2022 - Marc has recently moved to Poland for family reasons and it is a little too far to travel for rehearsals! 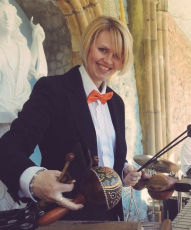 If as a child you were forced to sit and watch a John Wayne Western you will have heard Bev's signature rhythm, the dead donkey.  When all else fails, when we have no Glockenspeil part, no spare bass part and no other inspiration, dead donkey it is and it works beautifully with some of our Oompah - who would have thought it?  For a percussionist Bev is a rather good saxophonist but we are STILL trying to persuade her to bring it along and play The Simpsons for us. She is also classically trained as a vocalist and still performs with some of the UK's top choirs. 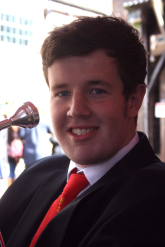 We said a tearful farewell to Marcus in September 2016 as his Mum popped him onto the train to the South Coast.  Marcus has run off to join... the Royal Marines Band Service.  Marcus is another rugby man (where do they all come from?) and if you ever see this man mountain you'll know why.  That said Marcus is very quiet and thoughtful but there's a cheeky side underneath ready to pounce.  We always look forward to seeing Marcus on the odd occasions he is home on leave to visit family for a catch up on his progress, and of course, a pint!

Update May 2021 - after transferrinng to the British Army, Marcus is now based locally and we are very pleased that he will be able to join us on a more frequent basis! Welcome home... 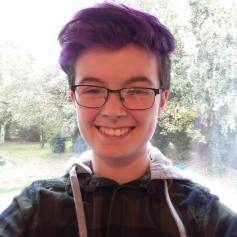 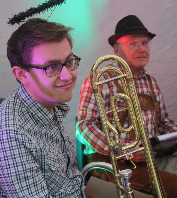 Dan is one of life's quiet gentlemen, or at least that's the side we see most. A music graduate you would think that he might have chosen more wisely than trombone - we do love them really.  What's the one thing you never say to the trombone section? Can we have a little more volume please.  Dan is a huge asset to the band with his rich tone but we think he needs more preparation on his Oompah costume - come on Dan!

Update - Dan has now moved to Derby with his young family to be closer to family members. 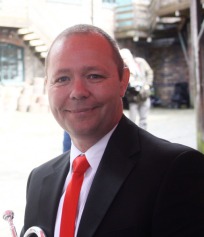 One of the original '3 Amigos' (you can guess the other 2) it could be said that Mike is a little bit of a joker - it does mean that he fits in perfectly with this bunch though (his words).  Mike has been playing the cornet (again) since 2011 after a 20 year break.  Like others, Mike had become fed up and disillusioned with traditional brass banding and competitions and stopped loving his music.  Since Mike helped to form PVB and particularly take the Oompah Group forward he has regained his mojo!  As our media officer he has given the band a huge amount of exposure and even had our logo projected onto the roof of the O2 in London as we worked with O2 during the 2015 Rugby World Cup.  As a rugby referee on the National Panel he's often found in Lederhosen at rugby clubs before rushing to gigs.  Personally I think there's more to it than that!! 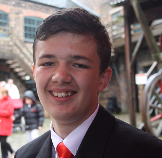 Yep you've guessed it, Chris is Mike's son (don't tell him he looks like his Dad though).  A rugby referee and a cornet player too, hmmm.  Currently studying for his A-Levels and wanting to join the Royal Air Force, Chris was also a member of Foden's Youth Band before other commitments took over.  He now plays all across the UK with the National Concert Band of the Air Cadets; one of the most prestigious and formidable youth bands in the Country.  Gala Dinners, Air Tattoos, Royal Parades all feature on his gig list so far plus the odd Gold Medal at National Championships here and there.  Like any teenager, we wish he would put his phone down at rehearsals though !

Update May 2021 - Chris is now focusing on his further education and is in great demand as an experienced rugby referee. We wish Chris all the very best for the future. 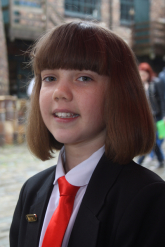 Ok we've kept this one easy, its Mike's daughter.  Before you ask she's not into rugby; cheerleading and dancing are more her thing, she says that she's too small for netball - you'll see why.  Aimee (or AJ) is growing as a player all the time and makes a beautiful sound playing Annie's Song on Flugel too.  If she ever asks you to take the wrong hand make up challenge with her - don't!  She's depressingly good at it and it may just appear on her youtube channel too.

Update May 2021- Aimee is now concentrating her efforts on her passions of singing and dancing.  We all wish her well for the future. 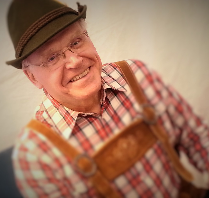 Well it appears that we have an actual real life musician in our ranks - I'm not sure how we managed that -  but Chris is very welcome.  Not only is he our resident German specialist and Oompah officionado but he also playes the flute, soprano and alto sax, even the harmonica.

Chris is a member of several bands; when asked why he chose PVB, he answered "their friendly and non-competitive nature and their wide selection of entertaining music" - awww we love him.

We were deeply saddened to announce that Johnny passed away suddenly but peacefully at home on 1st May 2021. His profile remains below as a mark of respect. 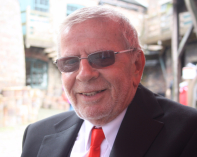 "Here's Johnny".  We all love Johnny (we won't give away his nickname but see if you can guess who we think he looks like).  The statesman of the band, Johnny had been retired from playing kit for rock and pop bands for years until he heard about PVB and decided to have a go again.  John doesn't read music like the rest of us - he "just feels the music, man."  Let him get onto the classic rock and watch him go.  He's even been teaching our Bavarian Bear a thing or two about drums...

Band Manager Glynn knew Johnny for 30 years before we started our own band in March 2015 and knew what a talented drummer Johnny was.  For 9 months, each time we saw him we would mention that we needed a drummer for our new band and he would say ‘good luck with that’ and smile.  In January 2016 Glynn bumped into Johnny in Oakhill Paper shop, where he finally talked him into giving the band a go, for one night. Glynn had worn him down and he came to his first rehearsal.  As he hadn’t played for a long time, even though he played brilliantly, he was still not sure or confident that he was good enough. When we went to pick him up for his second rehearsal, he tried to get out of it, but with a push from Glynn and a kick up the bum from wife Christine he came along and then never looked back.

As Johnny was now giving us a brilliant drum beat to play to, we decided to branch out into Oompah.  Getting Johnny into Lederhosen was a sight to behold, but he went along with it as he always did. When it came to our next Poptastic concert he would just go with the flow when it came to fancy dress.

During his time with the band, Johnny played at some outstanding venues - venues that he said he could now tick off his bucket list, Portmeirion in North Wales being one of them.  He played 6 concerts there over 3 years, and truly enjoyed them.  In fact, on our most recent visit in 2019, he was the last man standing, going to bed at around 3.30am after drinking into the small hours with Marc & Lou.

Johnny became a little bit of a TV star after we took a small group to Middleport Pottery to film the opening credits of The Great Pottery Throwdown. One of the most amusing moments was when Melanie Sykes got one of Johnny’s looks for swearing and she had to go over and apologise to him!

One thing Johnny had always wanted to do was visit the Royal Albert Hall in London.  We had the opportunity to get a VIP box to watch the Royal Marines Massed Bands perform their annual Mountbatten Festival of Music concert and Johnny jumped at the chance to go.  He loved to travel by train, so we would make a day of the train journey by putting him by the window with a few G&Ts and some nibbles to chill out.

Johnny loved to chew the fat after a rehearsal or concert with a pint and sometimes a meal with a group of his band mates. His love of mint sauce that he generously applied to his double egg & chips in The Greyhound Inn will go down in history.

We have spoken to all the band members and apart from his drumming and his cheeky smile the thing they will miss the most are their chats with him in the pub over a well-earned pint.

You may be gone mate, but all at Penkhull Village Brass will never forget you.

We were deeply saddened to hear that Derrick passed away peacefully on 10th April 2021. Here is a short obituary as a mark of respect. 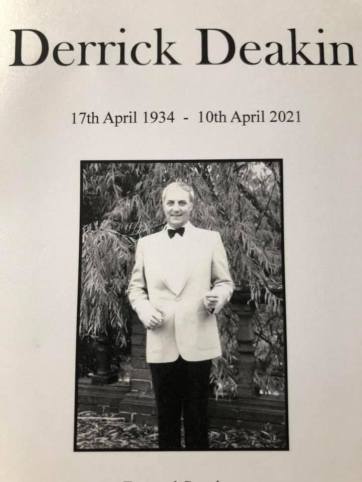 A very sad but dignified day today as we laid to rest a great brass player, teacher, conductor, mentor and friend. Derrick influenced probably hundreds of young musicians, many of whom owe our successful musical careers and enjoyment of music to him. After a celebration of his life at St. Philips Church Werrington, it was an honour and a privilege for a few former pupils to reunite and play for Derrick one final time.

Nothing could be more fitting today (especially during the current pandemic) than the lyrics of John Miles:
Music was my first love,
And it will be my last,
Music of the future,
And music of the past.
To live without my music,
Would be impossible to do,
'Coz in this world of troubles,
My music pulls me through.
Your legacy will live on - we are eternally grateful. RIP x 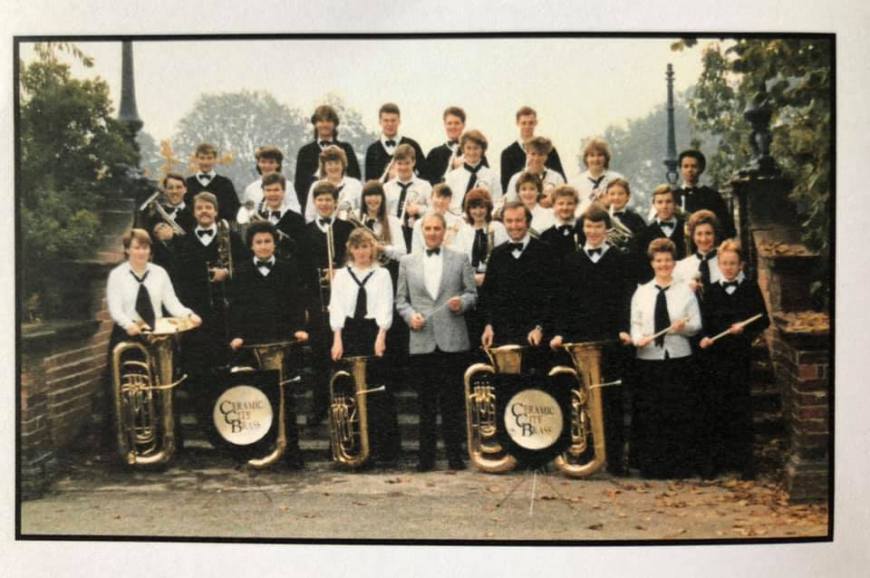